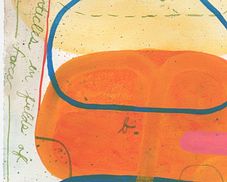 Jesse Bell is a contemporary abstract painter who strives to condense his visual language into two-dimensional imagery and to create paintings that suggest a story or an event, or convey to the audience a memory, situationn or scenario.  Focusing primarily on the abstraction and interaction of organic shapes in various painting mediums, he employs symbols and detached iconography to create what he refers to as 'visual poems.'

Inspiration for his work comes from many unassuming places-an errant line, a whirl of handwriting, the prickly thatch of cross-hatched marks, a splatter of ink-each element contributing in its own unique way to the formation of his images.  The resulting work is steeped in the visual language of modernishm and the corresponding, med-century modes of formal exploration.

Jesse lives in Milwaukee, Wisconsin and shows here at Cappaert Contemporary Gallery and in New York as well as selected exhibitions abroad and in the states.