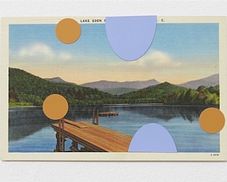 Mary Bergs is an installation artist best known for large-scale compositions of found and made objects and images.  Bergs actively scouts the world for ordinary things that have been cast off or forgotten, giving them a second life in arrangements designed to heighten our visual awareness of everyday surroundings.  In her series of collage works, WHAT WE THINK WE KNOW, Bergs explores a two-dimensional realm that hones in on the optics of perception and memory.  Working with vintage postcards, Bergs superimposes simple shapes - cut from paint chips - over select pictorial scenes.  Through her juxtaposition of seemingly contradictory elements Bergs animates the relationship between figure and ground, trumping the nostalgia of historical landmark or pastoral scenes.

Bergs completed her Bachelor of Fine Art Degree in 1999 at the University of Minnesota and also has degrees in psychology and social work.  She has been the recipient of two Minnesota State Arts Board Grants and a Jerome Travel Study Grant.  She has exhibited  work regionally and nationally.  Bergs currently lives in Benton, WI.