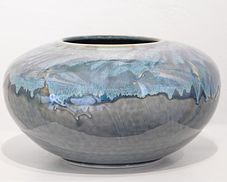 Scott's passion for creating functional pottery from a lump of clay began almost three decades ago in a college classroom.  Making his own glazes and overlapping them in various ways was yet another way to enhance his pieces.  His greatest joy is opening the kiln to discover how every object's textures uniquely interacted with each glaze.

During his winters in Arizona, Scott has been sharing his talents with others at a creative arts center.  He is inspired by the excitement his students feel when they are able to create their own pieces.  Scott has also been inventing new glaze combinations with the vast collection of glazes at the arts center.  He looks forward to applying them to his designs.  Scott primarily lives in Sister Bay where the water and skies inspire his ceramics.